In conjunction with DallowayDay2018 (see the Events page), we thought we’d ask Woolf fans for their favourite Woolf quotation. Don’t worry about the exact words, we can probably find the one you mean. Journalists and others often condense Woolf’s words into a ‘neater’ or ‘improved’ form; for instance, ‘I would venture to guess that Anon, who wrote so many poems without signing them, was often a woman’ (A Room of One’s Own) often appears as ‘For most of history, Anonymous was a woman’.

So what are we asking you to do? Just click on the ‘Send Message’ button on the VWSGB Facebook page and type in your favourite Woolf quotation, where it comes from and a few words about why you like it, and we’ll add it to our list.

We need your quotes by the third Wednesday in June, which most Woolfians consider to be the day on which Clarissa Dalloway takes her walk around London and holds her party. This year, as in 1923, when Mrs Dalloway is set, this falls on Wednesday 20 June.

When we’ve collected all your ideas, we’ll shortlist the top 5 and ask you to vote for one of them. We’ll announce the result in early July.

The votes have all been counted, and one Virginia Woolf quotation has been voted for above the others. Intellectual freedom is much on our minds at the moment it seems (possibly related to the current political climate), as the winner is:

Lock up your libraries if you like; but there is no gate, no lock, no bolt that you can set upon the freedom of my mind.
(A Room of One’s Own)

Thanks everyone for voting, and to those who suggested quotations for shortlisting. We’ll do the same thing for next year’s Dallowday and see whether we get a different result. 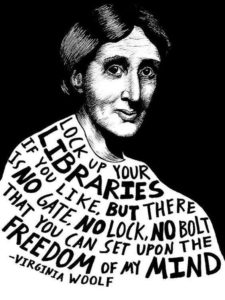