Although the VWSGB considers that Woolf’s writing is much more significant than the manner of her death, this story concerning her suicide might be of interest. Researchers from St Joseph’s Healthcare and McMaster University, both in Hamilton, Ontario, Canada, and the University of Rio Grande do Sul in Brazil are investigating Woolf’s word choices, comparing 54 random samplings from her letters and diary to 46 documents written in the two months leading up to her death in March 1941. The researchers were looking for changes in her language that might have signalled the likelihood of a suicide attempt. They were able to do this because, as every Woolfian knows: ‘Virginia Woolf left a vast written repertoire contained in her diaries, where she wrote freely about her feelings, providing a living record of her past mood states.’

The study, entitled ‘Potential use of text classification tools as signatures of suicidal behavior: A proof-of-concept study using Virginia Woolf’s personal writings’, which involved the creation of word clouds from the words most often used by Woolf, was published in scientific journal PLoS One on Wednesday 24 October, and can be found online.

The study found that ‘The words that appear exclusively in the suicide word cloud are “blue,” “books,” “house,” “miss,” “she,” “suppose,” “yes,” “you,” “Vita,” and “war”’, while ‘The words that appear exclusively in the word cloud written out of the period leading up to Virginia Woolf’s suicide are “ask,” “better,” “good,” “got,” “hope,” “how,” “know,” “long,” “many,” “may,” “nice,” “rather,” “says,” “tomorrow,” “Virginia, and “well”’. It is hoped that identifying this distinct difference in use of language will help in flagging up risk of suicide in vulnerable individuals. 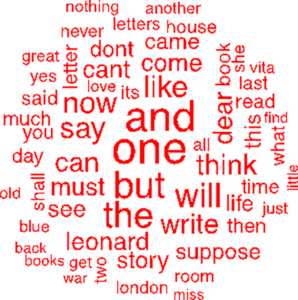 Word cloud of words written in the last 60 days before Virginia Woolf’s suicide. 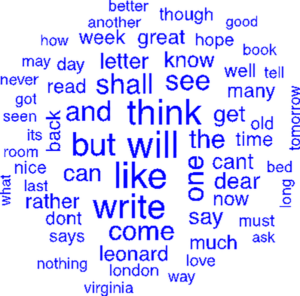 Word cloud of words written in randomly selected periods, outside the two months prior to Virginia Woolf’s suicide.