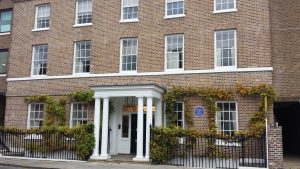 Virginia Woolf lived in several houses in London but not all of them survive. After many years as offices, Hogarth House in Richmond, where Virginia and Leonard lived from 1915 to 1924, has been refurbished as two adjoining luxury houses sharing a common entrance. The house that has been fully refurbished and prepared for viewings is next door to where the Woolfs lived: they bought this half of the building in 1920, but let it out and never lived in it themselves. The entire building is now called Hogarth House, with ‘Leonard’ on the left and ‘Virginia’ on the right.

Dating from around 1750, the building at 32–34 Paradise Road was originally constructed as a single house but was converted to two houses in 1870. The new layout reflects this later change, with a shared central entrance porch facing onto Paradise Road, but with each house having its own front door.

When the Woolfs moved in (March 1915), the building consisted of Suffield House on the left and Hogarth House on the right. In March 1917 they purchased a printing press and the Hogarth Press was born in their drawing room. Both events are commemorated in a blue plaque. Their first publication was Two Stories, comprising ‘The Mark on the Wall’ by Virginia and ‘Three Jews’ by Leonard. Virginia’s first novel, The Voyage Out, was published by Duckworth & Co. the day after Leonard took possession of the house, and several others of Virginia’s books were written while they lived here: Night and Day, Monday or Tuesday, Jacob’s Room and much of Mrs Dalloway.

‘Leonard’ and ‘Virginia’ are on sale for £3.25 million each. Pictures of the interior (‘Leonard’) are available from the estate agent’s website.