You don’t have to book: just turn up at the Eastern (non-Church of England) part of Highgate Cemetery in Swains Lane. It’s a bit of a walk from Archway tube; buses require research (possibly the C11 goes up Swain’s Hill but there’s no bus stop at the Cemetery main gates; or take buses 143, 210, or 271 to Lauderdale House and then walk through Waterlow Park). Or park where you can (Swain’s Lane is partly one-way S to N) between 10am and 4pm (10am and 5pm, April–October) and go in the entrance by the chapel. Whoever is on the gate will sell you a map with Sir Leslie Stephen marked on it (he is, however, not buried there: he was cremated in 1904 and his ashes were scattered over his wife’s grave).

The graves are fairly near the gates. However, as you will see when you find them, there is nothing engraved on Julia Stephen‘s headstone, but Stella Hills‘s is visible next door. From the gates, take first unpaved path curving to the left; shortly after there is a narrow path at 90 degrees to the left; at this point Stella’s stone is visible at the top of the little path by the fence, behind which is Waterlow Park. While still on the bigger path, on your right is a black shiny gravestone with gold lettering to Benjamin E. K. Simmons, 1987. On the other side of Stella is an empty space: apparently, Jack Hills bought the space, but failed to take up his option in 1938 (no doubt the result of his second marriage).

Thoby Stephen (1880–1906) was cremated and his ashes were also scattered there. Although Julia’s stone appears without lettering, there are a couple of lines at the bottom of the accompanying tablet referring to Thoby. 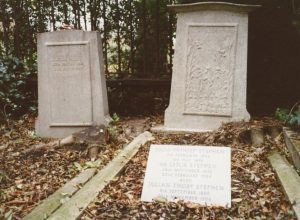 See Woolf’s A Passionate Apprentice, pp. 115–16: ‘Stella was buried by mother’s side in Highgate . . . Jack took Nessa and me to Highgate to see Stella’s grave. The grave is next mother’s – near you as you go in. It was covered with dead flowers – we sat down & talked for a long time . . . ‘